Inflation and the Business Cycle

Inflation is a rise in the general level of prices in an economy. That means all the goods and services that together make up gross domestic product (GDP). And before we look at the relationship between inflation and your investments, let’s put price increases into context.

Inflation generally doesn’t appear out of nowhere unexpectedly. There’s a reason that prices rise over time. It’s an imbalance between supply and demand. Supply and demand impact the health of the overall economy.

When consumers feel good about their finances, they tend to buy stuff. That buying benefits the businesses that make those things. The more consumers buy, the more things businesses make to meet rising demand.

This typically leads businesses to hire more people. Those people buy more stuff, creating even more demand. When you add up all the businesses making more stuff and hiring people to help meet increasing demand, you end up with a healthy economy.

Inflation is a symptom of that. So, in that respect, it’s a good thing. It’s a heck of a lot better than the alternative. The flipside of a healthy economy – referred to as a recession – takes away all of those benefits.

People worry more about money. They buy less. That forces businesses to make less. That leads them to let workers go. They stop buying stuff. This leads to more supply than demand. Prices go down. The economy slows.

All of this economic activity (good and bad) is call the business cycle. 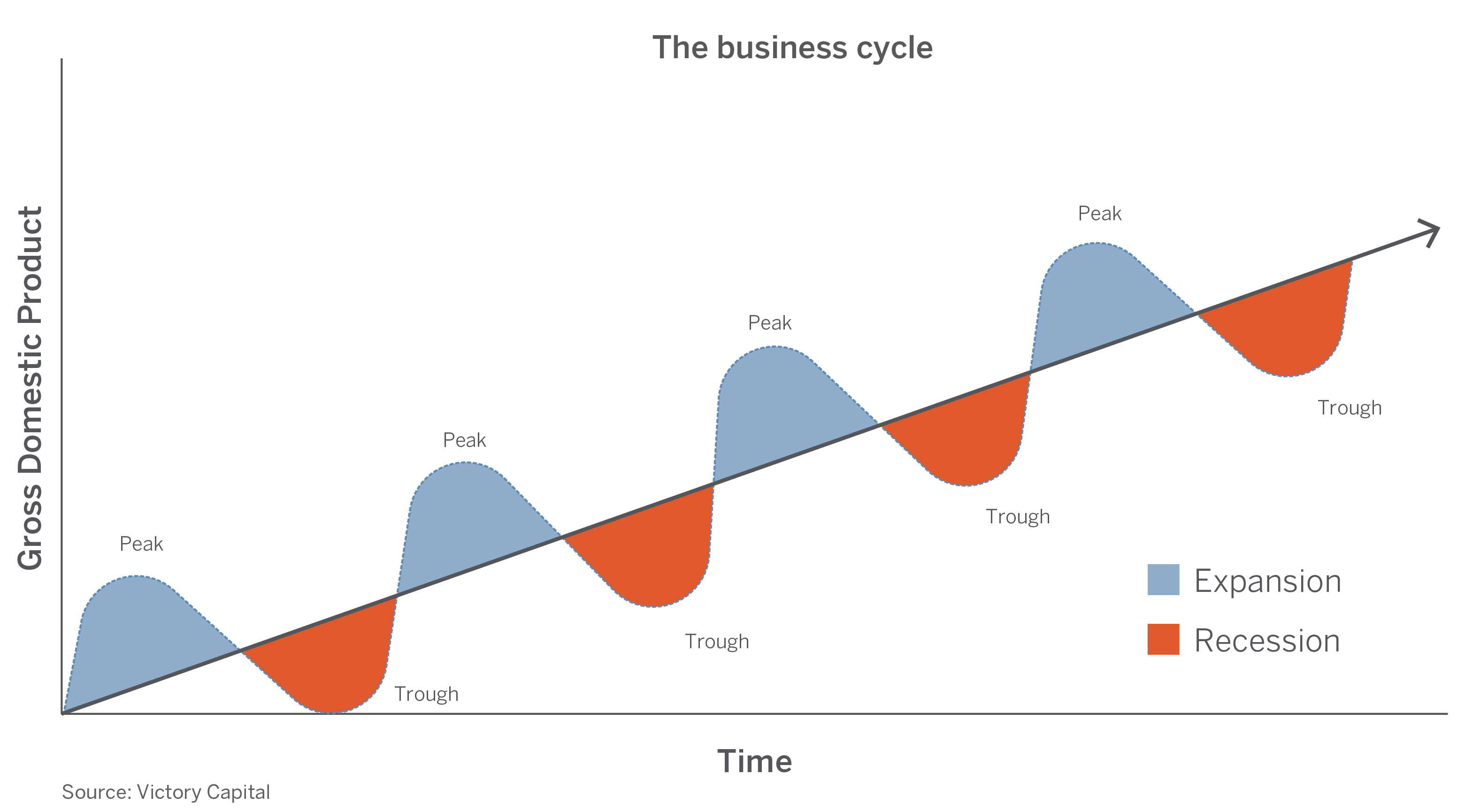 As the graph above shows, the business cycle is the economic cycle.

The life of an economy is cyclical.

It has its ups and down, peaks and trough. Businesses have periods of expansion and contraction. A healthy economy eventually slows and sometimes dips into recession. That leads to recovery, then expansion, and eventually another slow down.

This is all normal. Nothing to get too worked up about. For the most part, recessions don’t bring all economic activity to a halt.

Yes, the Great Depression of the 1920s and ‘30s was bad. The Great Recession between 2007 and 2009 is still probably fresh in your memory. These were extreme, not the norm. But in each case, the recoveries that followed lasted decades.

The U.S. economy has gone through many business cycles without the presence of high levels of inflation. For example, between 1980 and the end of 2020, inflation averaged right around three percent.1 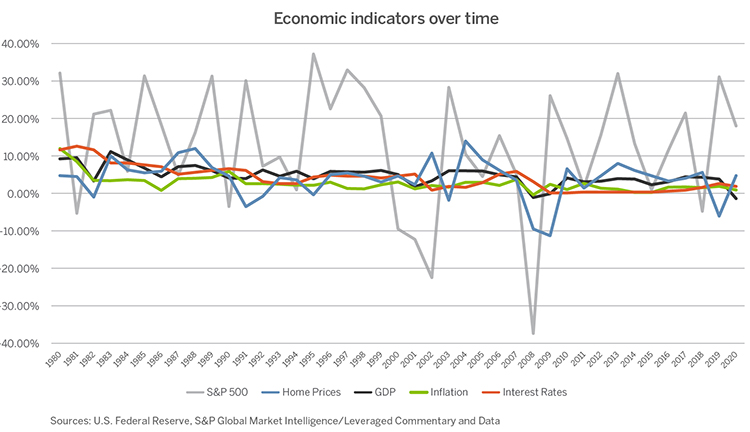 At the same time, GDP growth averaged more than five percent.2 There were a total of six recessions (three pretty serious) during those years. At the same time, equity investments (common stocks and the homes people live in) grew in value at an average annual rate of 13.26 percent and 4.34 percent, respectively.3

And as you can see below, throughout this whole period, common stocks and residential real estate proved to be reliable ways to build wealth. 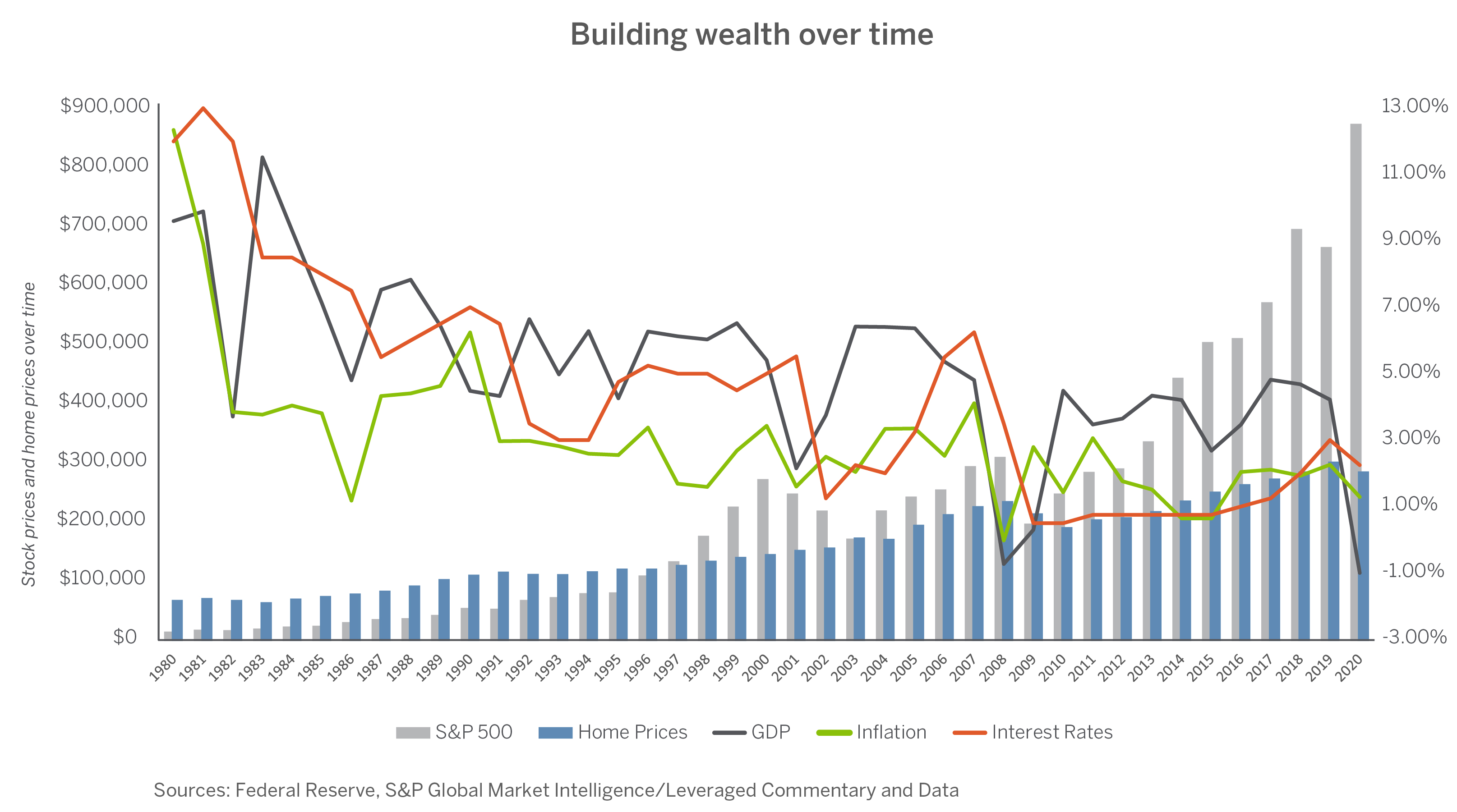 As the graph above also shows, both inflation and interest rates trended lower between 1980 and 2020. The Fed Funds rate averaged about 4.5 percent in those 40 years.4

But what if that changes? What if inflation begins to rise and interest rates follow suit? For bond investors, this could be a double-edged sword. To be sure, rising interest rates would be bad for bond prices. But there’s a silver lining.

The mild inflation of the last 40 years was nothing like the decade that preceded it, when inflation averaged more than seven percent. But looking at asset values during that time offers some solace.

Sure, interest rates rose and bond prices fell. But as they did, fixed income investors enjoyed some of the highest income opportunities in history. The Fed Funds rate averaged nearly 6.5 percent.5

Homeowners enjoyed meaningful wealth building opportunities. The median price of homes in America rose in value by an average annual rate of more than 10 percent during that time.6 While stock investors fared the worst, their returns were still positive. Stocks rose on average of more than three percent annually.7

To be fair, the high rate of inflation during the 1970s had less to do with the business cycle than other problems in the economy.8 And the long-term average (dating back to the 1920s) is even lower than the rate over the last 40 years.

So, while inflation can be problematic for consumers (especially those on a fixed income), over the long haul it’s a sign of a pretty healthy economy.

Mild inflation doesn’t have a catastrophic effect on asset like stocks and residential home values. It can have a negative impact on bonds since it tends to lead interest rates higher. It’s certainly something to factor into your investment planning. But it shouldn’t be a cause for alarm.

If you’re looking for ways to factor inflation into your long-term investment plans, reach out to one of our Investment Specialists. They’re available at (800) 235-8396, Monday through Friday, 7:30am to 8:00pm (CT).

Your financial future is like a summer road trip

How to invest in a volatile market

We are proud to serve your investment needs. Our Member Service Representatives are available to provide portfolio planning, education savings services and general investment guidance. Please contact us. We’re here to help you find the right investment solutions for you, your family and your future.

Contact the Relationship Managers in your region to learn more about Victory Capital.

All investing involves risk, including the potential loss of principal.

All information provided is for educational purposes only and does not constitute investment, legal or tax advice, an offer to buy or sell any security or insurance product; or an endorsement of any third party or such third party’s views. Whenever there are hyperlinks to third-party content, this information is intended to provide additional perspective and should not be construed as an endorsement of any services, products, guidance, individuals or points of view outside Victory Capital. All examples are hypothetical and for illustrative purposes only. You should obtain relevant and specific professional advice before making any investment or other decision. This material is based in part upon information from third-party sources that we believe to be reliable, but which has not been independently verified by us and, as such, we do not represent that the information is accurate or complete.