Henry Dominguez joined USAA® in 2013. He is a Service Specialist in Victory Capital’s Direct Investor Business. He has been deployed three times over the course of his career, twice in the last two years. He has a unique take on the meaning of military leave.

“I was aboard a guided missile cruiser in the Arabian Sea when Victory Capital acquired USAA Asset Management Company. I returned from that deployment at the tail end of the transition from my old employer to my new one. At the beginning of the week I was a USAA employee and by Wednesday I was a Victory employee.

Less than nine months later, I got deployed again. I remained stateside. But I was away from home and Victory Capital for a full year. But it was a pretty good year.

A big part of that was the people in Victory Capital’s Human Resources (HR) department. They handled all my questions and concerns. They were so polite and professional. I want to thank them and let them know how great they were and recognize them for their compassion.

They told me and my wife that they would handle things directly if we needed something while I was away. They gave us their cell numbers and email addresses and said my wife could contact them if something came up. We were very appreciative of that.

It helped me out mentally to know that Victory Capital was there to back me up. The military leave program we have is just exceptional!

I came home to the same job at the same desk next to the window. The President of our Direct Investor Business came to say hi and welcome me home. One of my colleagues decorated my desk in red, white, and blue and a big Welcome Home sign. That’s what I like about the atmosphere here.

Even though I was away for a year, a lot of good things happened. During my deployment, we sold our house and bought a bigger one. We welcomed our second grandson. We were able to pay down some debt. The kids are doing good. The family’s doing good.

Some of the goals of Victory Capital’s Military Employee Resource Group (MERG) include connecting the military family within Victory, networking, career development, and volunteering. We honor special days for the military, such as each branch's birthday. We use the firm’s intranet to deliver networking information. And we provide feedback on Victory’s social media content for the military community.

Back to Corporate Social Responsibility 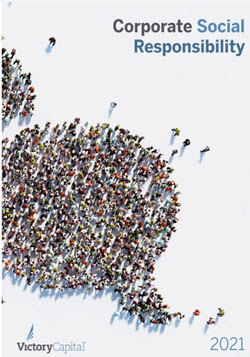 We are proud to serve your investment needs. Our Representatives are available to provide portfolio planning, education savings services and general investment guidance. Please contact us. We’re here to help you find the right investment solutions for you, your family and your future.

Contact the Relationship Managers in your region to learn more about Victory Capital.